With the help of Chris’s father, Flesh Eating Creeps record four songs for Amendment Records, on the four-track, in the practice space.

The band’s second out-of-town show is in January at the 180 Club in Hagerstown, MD.

As the band begins listening to more heavy metal, as well as more technical punk like Born Against, Heroin, and All, their sound grows more complicated. That spring, they record another four-track demo, featuring the song “Bullshit Vein,” and cover art inspired by the heavy metal horror movie Black Roses.

In April, the band plays an all ages matinee with The Infertil at the Grog and Tankard bar in Georgetown, Washington, DC. After the show, Chris, who had an undiagnosed seizure disorder, has a grand mal seizure on Infertil drummer Will Cole’s neighbor’s lawn. 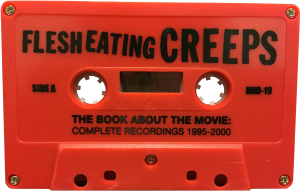